Your Future Is in Gen Zers’ Hands

admin July 18, 2017 The Latest New In Home-Based Business Comments Off on Your Future Is in Gen Zers’ Hands 29 Views 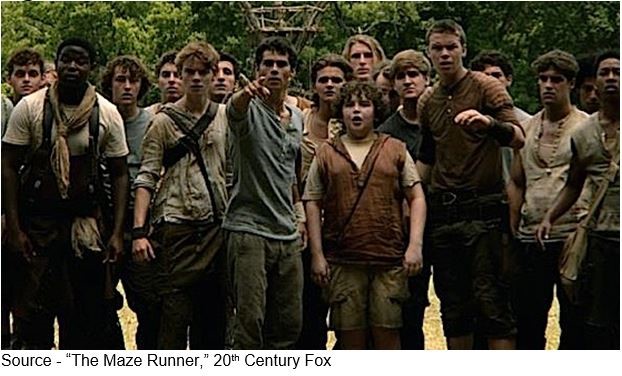 “This place… it’s not what we thought it was. It’s not a prison, it’s a test. It all started when we were kids. They’d give us these challenges.” Thomas, “The Maze Runner,” 20th Century Fox, 2014

Recently, I had one of those friendly discussions that never go anywhere – disagreeing about which set of market research projections is the most correct.

This one was for VR (virtual reality) HMD (head-mounted display) with a gaming industry analyst friend, following the gamers’ nirvana … E3.

Ted was complaining that despite all the noise and bravado, HMD manufacturers were dropping prices and offering “specials,” an obvious knee-jerk reaction that units weren’t flying off the shelves as everyone had projected (and cranked up production for).

I mentioned the discussion to David Brady, CEO of Cream Productions, whose firm has produced a number of VR projects, including stream content for TV networks.  I figured a person who develops content people participate in and react to might have more savvy about where things are and where they’re heading.

A complete aside here … being “in the trenches” with Confederate soldiers isn’t cool.

And neither is North America with half of the area gone.  Makes the continent look naked!

David just laughed about the numbers and said there are several things wrong with the projections.

“We’re still in 1st generation hardware,” Brady explained. “And we can expect at least two to three more versions in the next few years.  But right now, you put on an HMD and immerse yourself in the content and you have to say ‘jeezz, this is fantastic.’”

He also said it’s still a nuisance to put on a hot steamy HMD.  In addition, the resolution and latency issues have to be resolved.

“However,” he added, “Seeing the investments firms are making, the experience will improve drastically.  The content we and others are developing will help them; and their efforts will help us … it’s synergistic.”

Cream and a number of other VR filmmakers’ work has been well received but his most poignant point was that projections were based on the wrong market segment … millennials.

The follow-on Generation Z will be living in and consuming the VR technology just as millennials are today with their iPhones.

“I’ve got an unfair advantage,” he noted. “I have a built-in research lab when I go home every day because I have several teens/tweens and they have friends who come over to try the new stuff. 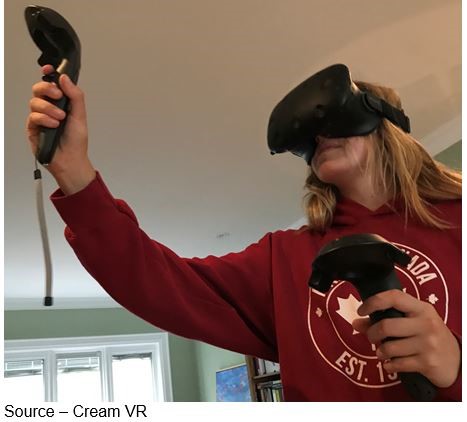 Test Lab – David Brady, CEO of Cream Productions, has a constant stream of product/service testers for the VR content his firm produces for clients and content distributors.  His daughter and her friends are more than willing to test video games and immersive content (like climbing above) and pull no punches on telling him their opinions.

“They took to VR immediately, even as our developers/production folks were refining their ideas, for the technology,” he explained. “And surprise, boys are different than girls. In watching the two sexes interact with the technology, I’ve come to the conclusion that in general, girls are more interested in the VR experience than boys.

“It seems almost counter-intuitive and it surprised me,” Brady noted.  “Females enjoyed climbing, active games, problem solving, involved stories and from watching both sexes interacting with the immersive content, I’m convinced we need to develop more content, games with them in mind.

“I’m no anthropologist or prognosticator,” he added, “but the younger-generation female is growing up with technology like a part of their daily life and AR/VR could play a huge part in the way they mature and where they take us tomorrow.”

“The millennial parent may pay for the new-generation technology; but it’s the teens/tweens, the Gen Z people, who make it happen,” Brady emphasized.

Back in Steve Jobs’ early Apple days, the company made a concerted effort to put Macs in schools for little or no cost; and folks thought they were crazy. 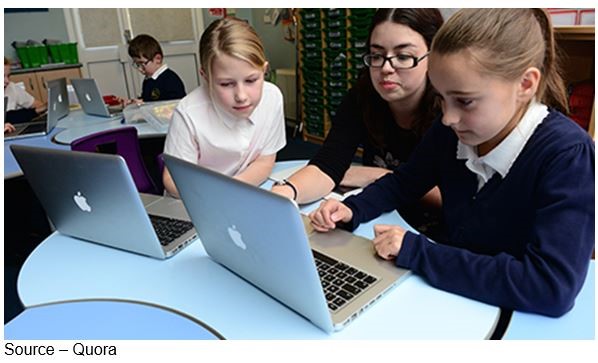 Start ‘Em Young – Apple was one of the first firms to place computers in schools.  Students went home, told their parents what they needed to succeed and the parents purchased “educational systems” for them.

The kids went home and said they’d flunk out and would never amount to anything unless they had a computer like they had at school and BAM!

Others said that was a helluva’ move. This past year, Google jumped in with both feet and the Chromebook has done very well.

And still, when companies want to sell stuff, they focus on millennials because well, they’ve got the money.

But who helps them spend it? Yep – teens/tweens.

Born between 1997 and 2011, the new potential customers are coming of age in large numbers. Marketers can’t afford to take as long to come to grips with them as they did with millennials.

Gen Zers tend to be great multitaskers, lots are self-starters, they’re big on individuality, they tend to have higher expectations than millennials and admit to being more addicted to their digital devices.

According to a recent HuffPost article, a full 40 percent of the younger generation is constantly on their phones or devices.

Globally, they are around 2B of the world population–27 percent.

What they’re doing now will impact tomorrow for a long time to come.

While Gen Zers emphasize personal privacy, they expect brands to be fully transparent.

They are frugal and brand-wary but also industrious and collaborative.

However, their total communications tool of choice is the smartphone.   And they’re getting them at a younger and younger age. 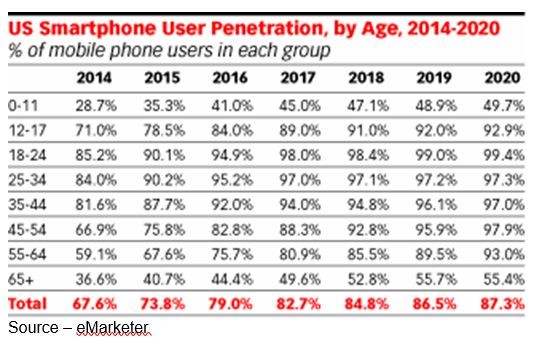 Young Power – While millennials may have ushered in the digitally-connected age, it was today’s Gen Z population that perfected it and made it an integral part of their day-to-day activity.

They’re a long way from a toy as well … they use them.

Their smartphone is the primary tool they use for everything.

They expect visual and technical excellence and transparency at their fingertips.

According to Pew Research, more than 24 percent of them are online on their devices constantly.   Fifty-six percent are online with their devices several times a day and the dependence (addiction) continues to grow. 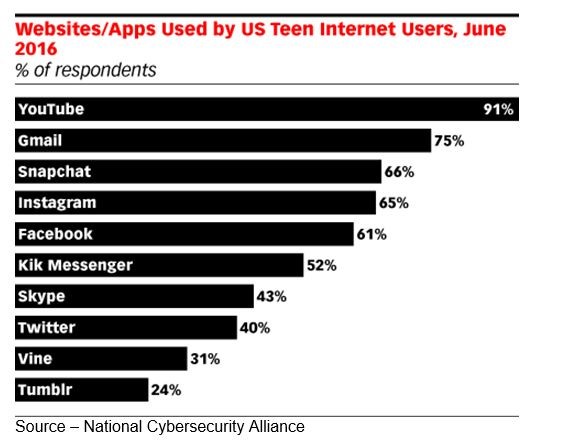 Video Life – The smartphone is the communications/entertainment device of choice for today’s teens and tweens. The devices are their connection to individuals and information in their expanding world.

Gen Zers spend more time with video and social media but don’t necessarily cut back on their time with other media.

According to a recent Leflein Associates report, they’re shifting from text-based online content and spending more time with video and social media.

Teens are spending more than one-third of their days using media such as online video or music — nearly nine hours on average.

Common Sense Media found that tweens (8-12) spend an average of six hours a day with their video and music–slightly more than their older siblings. 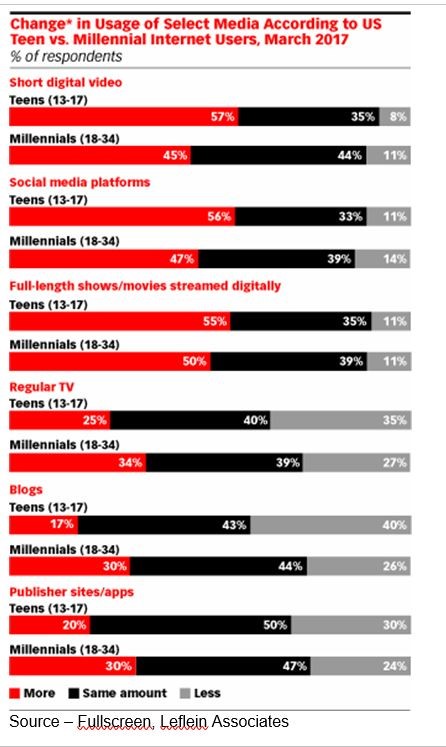 Entertain Me – While teens/tweens may use their smartphone for their personal content, they are open to all types of content (short and long-form); as long as it is of high quality, informative and interesting.  The same holds true for the ads pitched to them.

A majority of teens (53 percent streaming, 17 percent downloading) in the recent Nielsen report feel long- and short-form video is an important part of their information and entertainment routine.  It’s the way they start the day (65 percent before going to school) through to the evening hours (67 percent view before falling asleep).

In other words, video platforms provide the connections they can’t live without.

In the recent Ooyala report, the most widely viewed content was YouTube (85 percent) for short-form content; while Netflix rose in interest to 48 percent for longer-term video to view. 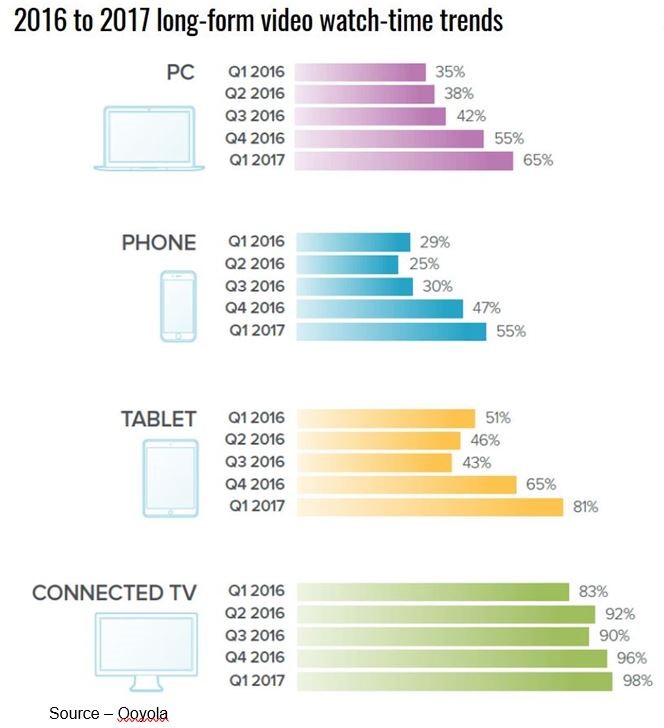 Growth – Both long-form video and smartphone viewing grew significantly this past year– especially among teens/tweens; and the trends can’t go unnoticed for companies or marketers.

While Gen Zers are more receptive to quality video ads, they react positively to skippable pre-roll ads and are less concerned about non-skippable mid-roll ads.

Four in 10 Gen Z viewers preferred ads to be featured in a video they were watching–as long as it was less than 15 seconds in length.

Smartphone usage finished the quarter with 46.9 percent of all video play, nearly equal to the total of all mobile devices from the previous year.

The just-released show will only work with limited devices, but the move is an obvious acknowledgement to the “buying influence” of youngsters today.

It will be interesting to see how rapidly they roll the show out across a broad range of devices … especially smartphones.

Putting the young viewer in control of the storyline will be something that Brady and other VR filmmakers watch closely because it has a lot of parallels to the immersive story telling they are working on to deliver.

Millennials and Gen Zers have two distinctly different sets of social media and content viewing habits and millennials (especially marketers) can learn a lot by paying attention to how teens/tweens consume their video content. 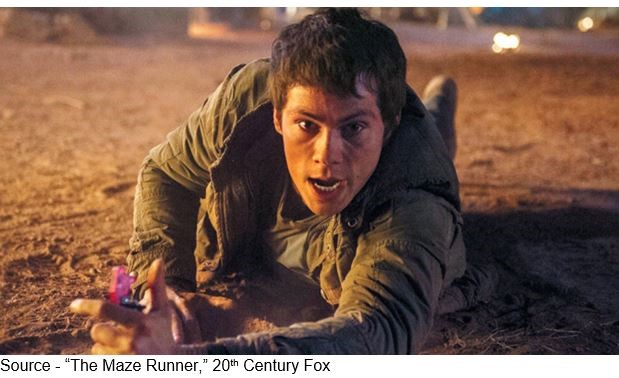 Remember, they were (almost) born with a smartphone in their hands and they probably know how to use it a whole lot better than you or me.

And the generation after them won’t understand how someone could use a communications tool that cumbersome.

As Thomas told the rest of the kids, “We don’t belong here. This place isn’t our home. We were put here. We were trapped here! At least out there, we’ve a choice.”

All the Teds, market forecasters and marketers of the world have to do is watch what they’re doing … and try and keep up.

The post Your Future Is in Gen Zers’ Hands appeared first on Home Business Magazine.

Discover a New Way to Protect Yourself from Data-Loss Nightmares

The post How to Build a Blog that Has Lasting Impact Upon Its Readers appeared first on ProBlogger.

If you want to have a blog that makes a difference in the lives of those who read it, I would highly recommend getting clarity around these three simple (yet powerful) questions: Who are your readers? What do they need? How will they change as a result of reading your END_OF_DOCUMENT_TOKEN_TO_BE_REPLACED

The post How to Build a Blog that Has Lasting Impact Upon Its Readers appeared first on ProBlogger.

1001 Fun Things To Do in Retirement

(58)
$15.39 (as of July 3, 2022 19:33 GMT +00:00 - More infoProduct prices and availability are accurate as of the date/time indicated and are subject to change. Any price and availability information displayed on [relevant Amazon Site(s), as applicable] at the time of purchase will apply to the purchase of this product.)

(12391)
$35.00 (as of July 3, 2022 19:12 GMT +00:00 - More infoProduct prices and availability are accurate as of the date/time indicated and are subject to change. Any price and availability information displayed on [relevant Amazon Site(s), as applicable] at the time of purchase will apply to the purchase of this product.)

(12391)
$14.99 (as of July 3, 2022 19:12 GMT +00:00 - More infoProduct prices and availability are accurate as of the date/time indicated and are subject to change. Any price and availability information displayed on [relevant Amazon Site(s), as applicable] at the time of purchase will apply to the purchase of this product.)

(12391)
$18.34 (as of July 3, 2022 19:12 GMT +00:00 - More infoProduct prices and availability are accurate as of the date/time indicated and are subject to change. Any price and availability information displayed on [relevant Amazon Site(s), as applicable] at the time of purchase will apply to the purchase of this product.)