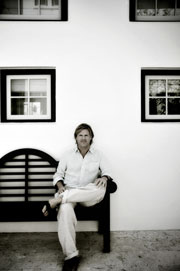 When Mike Ragsdale launched 30A.com, an online guide to the daily events, restaurants, and activities in a small beach resort area known as “Scenic Highway 30A,” his iPhone app was the first of its kind in Florida. “I never expected it to take off like it has,” said Ragsdale, whose home-based “mobile guide” business has over 350,000 fans on Facebook alone.

Ragsdale created his home-based business as a hobby, but when it started generating over six-figures of annual advertising revenue, he quit his consulting gigs and focused solely on his new hyper-local endeavor. “That’s when it really exploded.”
Soon, friends and fans began encouraging Ragsdale to launch similar mobile guides for other towns, neighborhoods, and resort areas. “Ultimately though, we decided against that approach,” said Ragsdale, a seasoned entrepreneur who once built successful online brands and communities for companies such as AOL. “My friend Jeff Armstrong and I partnered together and created a company that helps people use the same tools that we’ve developed to quickly establish hyper-local guides in their own communities.”

The new company is called TownWizard (www.TownWizard.com), it has helped entrepreneurs, businesses, and publishing companies launch guides in over 130 communities worldwide. Armstrong believes that the appeal to some entrepreneurs has been TownWizard’s surprisingly affordable price tag. “While sophisticated apps can cost $150,000 or more to develop, entrepreneurs can launch their local business for a one-time setup fee of $795, plus $249 per month.”

“We really wanted to make it affordable,” said Armstrong. “It’s obvious that every town and neighborhood will eventually have its own mobile app guide. The only question is, who will be the first person to create it?”

Most TownWizard partners operate their businesses from home, and some of them even have existing full-time jobs. Ragsdale says that his home-based guide business only requires about 30 minutes a day to manage. “But the truly magical thing is that it can be managed from anywhere,” said Ragsdale.

“It took numerous years of hard work to get my business to this point, but now that dream is coming true,” said Ragsdale. For more information about TownWizard, visit www.TownWizard.com. HBM

Previous Animal Friendly Businesses Gather at the 2nd Annual Vegan Oktoberfest
Next Value Proposition: How a local business doubled its space in 9 months

This post is based on episode 149 of the ProBlogger podcast. So you’ve come up with a great idea for a blog post. It’s a great topic, has plenty of depth, and will boost your reputation as an authority in your niche. But do it justice you need to cover a lot END_OF_DOCUMENT_TOKEN_TO_BE_REPLACED